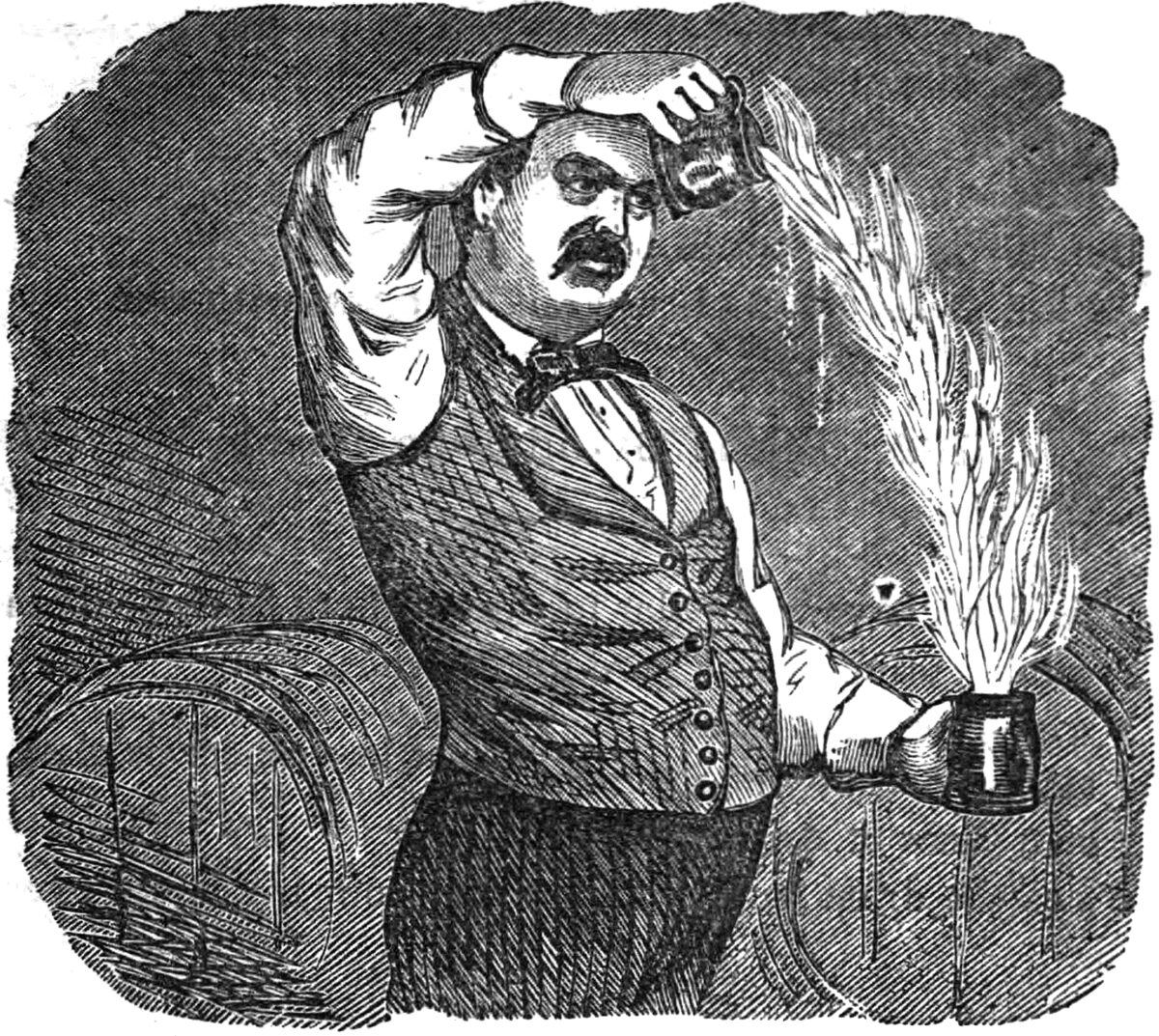 “The Lord smiled benevolently upon the city of New Haven, Connecticut,” were the first words in Herbert Asbury’s introduction to the 1927 reprint of Jerry Thomas’ own, The Bon Vivant’s Companion or How To Mix Drinks. Mr. Thomas, considered the father of American mixology, was believed to be born in Harbor, New York in 1830, but grew up in the Elm City. Jerry’s older brother, David, ran the Park House, one of the city’s leading hotels located along Chapel Street facing the Green. Here as just a youth, 15-year-old Jerry became assistant bartender, learning and yearning to invent and create new libations from the bar’s base of spirits. His guests included young Yale men, seasoned bankers and sailors alike.

From 1845-47 Jerry concocted his drinks from the Park House in New Haven and for another year or so he followed his brother to another local hotel, the York House on Forbes Avenue, until 1849. Jerry’s quest to quench his patrons’ thirst began to set him apart, and he established himself as the first recorded cocktail bartender in the country. Yale boys couldn’t handle his handiwork and Jerry needed a hardier clientele with a more adventurous alcoholic disposition. He looked west.

19-year-old Jerry Thomas set his sights on the setting sun, sailing off on March 26, 1849 for San Francisco aboard the bark Ann Smith where he experimented in making drinks with the ship’s own grog. It turned out the 24-man crew found Jerry’s recipes not quite above board and by the time they reached the Bay City on November 4, 1849 Jerry left the boat and kept a low profile. Once the coast was clear Jerry bee-lined for the El Dorado on Portsmouth Square, the city’s finest hotel at that time, and he became assistant bartender.

At the El Dorado Jerry began crafting original cocktail concoctions and his prominence as a drink slinger began to get noticed by the burgeoning immigrant population in this western-most frontier town. Most came for the Gold Rush, quick money and a new life. Some came to plunder. On one occasion in late 1849 the El Dorado became victim to a horde of banditos, set on holding up the bar for all it was worth. Instead Jerry offered them a drink, and he concocted a nearly lethal mixture which left all the miscreants writhing on the floor. Jerry’s action stopped the crime, and the local militia sentenced the punch drunk pirates to death.

Jerry Thomas’ reputation as a drink-dueling, bandit-busting bartender spread like San Francisco’s wildfires. Soon his El Dorado bar became a crowded social center. One extra large 49er came in demanding Jerry fix him a drink that would knock his socks off, and Jerry realized what was at stake. If Jerry didn’t knock this giant to his stool with a drink, his local clout would have been all but lost.

Jerry told the man to come back in an hour, and in that time Jerry awed the barroom while he carefully contemplated what drink he would have to craft. The result netted a full tumbler of Scotch whiskey, another of less boiling water, and a sulfur match. Jerry lit the match, ignited the whiskey flaming to the ceiling, and poured it arms stretched from one tumbler to the other creating a blue firestorm. Adding some sugar and lemon, the still-smoking drink was handed to the massive miner, and the Blue Blazer cocktail was born.

Upon consuming the drink in one large swig the miner fell into a daze, and Jerry’s Blue Blazer had become all the rage in California. Next Jerry set out to the Yuba River to mine for gold. Bar tending at night in Downieville, shown in the image below, he amassed $16,000 in savings. He even started a minstrel band and canvassed the area spreading music and his classy drinks to this rural outpost. Jerry’s stay along the Yuba was over and he felt obliged to learn more in another land. In late 1850 Jerry headed to Nicaragua and filled his head and stomach with new drink ideas.

Heading back home to New Haven in 1852, Jerry Thomas joined his family including brothers David, George and Andrew. David ran the City Hotel located directly across the street from the train depot on Union and Cherry Streets, and close to the harbor, Downtown and Yale. Andrew Thomas was the bartender at the hotel but when Jerry returned home, he and Andrew teamed up to open a bar and casino a couple blocks away. It was here in Jarvis Joslyn’s building at 75 Union Street in 1853 in the large second floor hall above a horse stable that Jerry proved his merry-making might. He introduced his flaming drink concoction made famous in California, the Blue Blazer, to the east coast here, testing the brawn of the Yale student body.

While well received in town, Jerry’s time in New Haven was cut short by his father’s death on February 19, 1854. He decided to set sail once again on his life journey of drink discoveries. Jerry first visited Charleston, South Carolina and learned how to make a proper Julep. He then tried out Chicago for a little before heading down to St. Louis. Here Jerry became the head bartender of the Planter’s House Hotel, the finest hotel in town, and invented Planter’s Punch and the Tom & Jerry drinks. Next Jerry uprooted again and dashed over to Europe where he visited Liverpool, Southampton, London and Paris in 1859. He returned to New York City in 1860 to work a bar, then traveled by wagon to San Francisco in 1861 to run the bar at the Occidental Hotel.

While in San Francisco, Jerry Thomas cultivated his best work yet, his landmark cocktail recipe book titled, The Bartender’s Guide. How To Mix Drinks, or The Bon-Vivant’s Companion in 1862. This was the first book of its kind in the world in the English language, and helped give Thomas the title of ‘Professor.’ In 1863 Jerry ventured to Virginia City, Nevada and returned to New York in 1865.

In the aftermath of the Civil War Jerry returned to Manhattan in 1865 to open a bar in the new Mortimer Building at Broadway, 22nd Street and Fifth Avenue. With his brother George the bar blossomed into an art museum and social center. Cocktails, art and a city busting at its seams made it a huge success. With Jerry Thomas at the helm, his Broadway barroom was one of the most popular in Manhattan. He opened his back room to struggling artist, Thomas Nast, whose racy political cartoons coined him both ‘The President Maker’ and ‘Father of American Cartoon.’ In 1873, Jerry Thomas and his brothers George and David moved up Broadway to number 1239 and five years later opened up at 3 Barclay Street.

In the afternoon of December 14, 1885, Jerry Thomas died of heart disease five minutes after returning to his house. He was 55 years old at his time of death, leaving not just his wife, Henrietta, and children, Henrietta, Milton & Louise, but a lifetime of adventures, passion and pursuit of making the perfect drinks. A rendering of Jerry Thomas in wax has been on display at The Museum of the American Cocktail in New Orleans, a testament to his continued esteem.