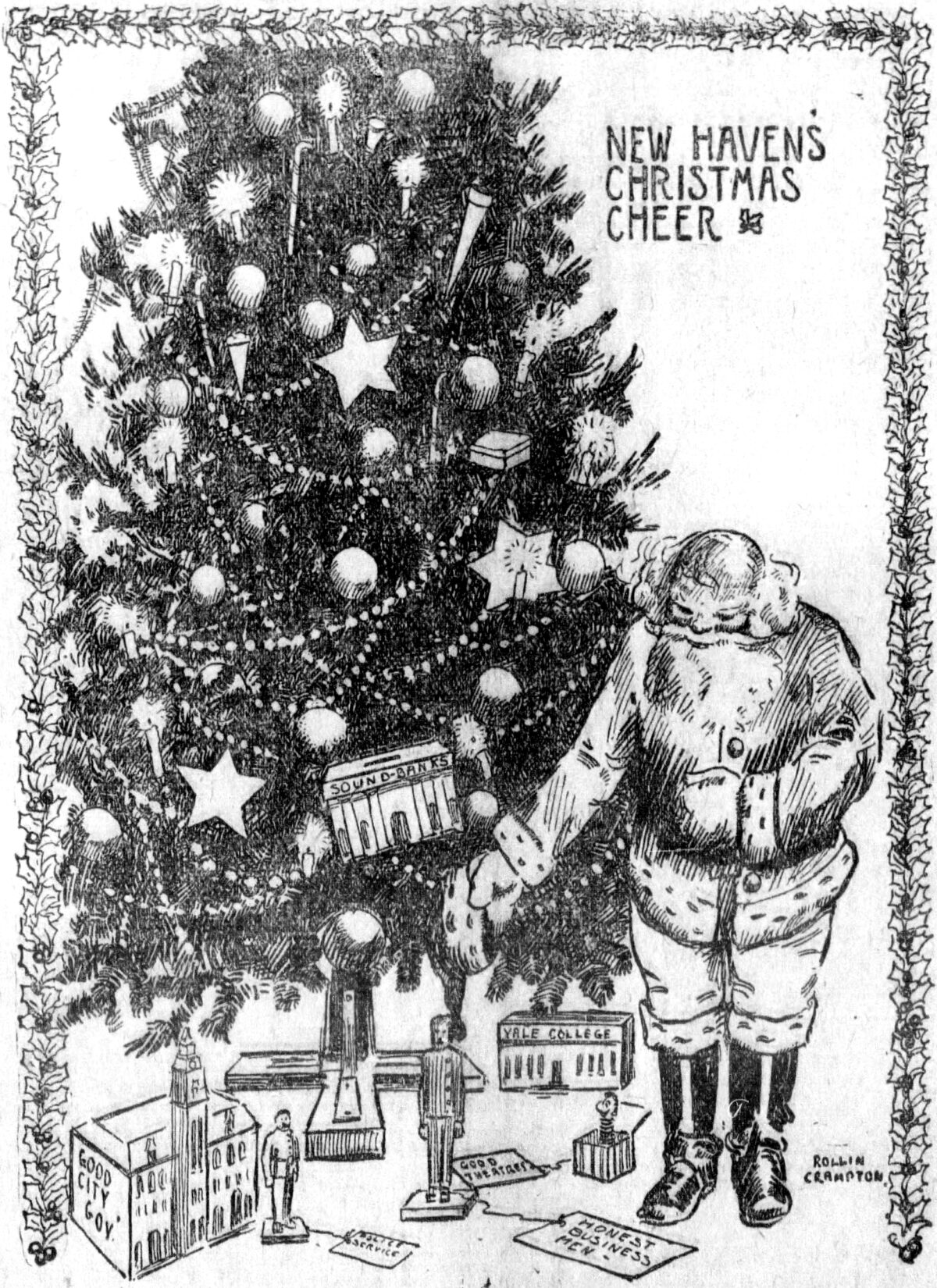 The improvement of New Haven’s civic life became a focus of city leaders in the beginning of the 20th century exemplified with the first public Christmas tree lighting on the New Haven Green in 1913. With a growing city full of hopeful immigrant families, well-to-do long-time residents, and a robust population of civically minded men and women, New Haven recognized the need for more public ceremonies. The act of a Christmas tree lighting which began in Germany as a custom called Tanenbaum, made its way to these shores with German immigrants a century or more prior. Its popularity had already taken root in American households, societies, churches and stores, and the tree with its flickering flames represented faith, life, light and hope.

While there were Christmas trees lighting up during the holiday in private homes, department stores, churches, community organizations and social clubs, New Haven was without a public tree lighting for most of its years. The first wave of public Christmas tree lightings in American cities began in 1912. This was a way of connecting people of all classes and backgrounds calling for the lit tree and jubilee, ushering in a new American ideal for what Christmas meant as a public celebration. These first cities to celebrate included New York City, Boston, San Francisco, Hartford and New Britain. This message made it to New Haven the following year when Amelie Sternberg Traut, child of German parents and wife of a New Britain industrialist, lectured on the merits of a public Christmas tree lighting to the Woman’s Club of New Haven on October 10, 1913.

The enthusiasm behind the public Christmas tree lighting was heating up in New Haven in late 1913 when members of the Women’s Club of New Haven encouraged Mayor Frank Rice to plan this celebration. Along with the New Haven Civic Federation, the mayor appointed a tree lighting committee headed by Lila M. Atwater along with other civically engaged city women. With their help and planning an inclusive celebration was organized for the benefit of impoverished children and their families starting on Christmas Eve on the New Haven Green.

The plan included hoisting a large evergreen tree up in the middle of the Green, attaching strings of hundreds of colored electric lights with a star at the top.  The electricity was donated by United Illuminating and a local contractor offered their service for free. At 6:00 PM Mayor Rice pressed the button lighting up the tree and beginning the festivities. A big band of musicians from the Second Company Governors Foot Guard was accompanied by 200 school children singing Christmas carols. That first evening thousands of New Haveners attended the event. The tree stayed lit until New Year’s Eve providing a glowing beacon for a hopeful future.

New Haven’s community Christmas tree lighting tradition continued year after year, growing in size and importance. The tradition has maintained its purpose to the greater community after over 100 years of pubic celebration. The ideals of these original civic-minded city leaders for an inclusive community celebration bringing light and warmth to the neediest is a tradition that helps renew bonds and begin new ones for New Haveners for years to follow.